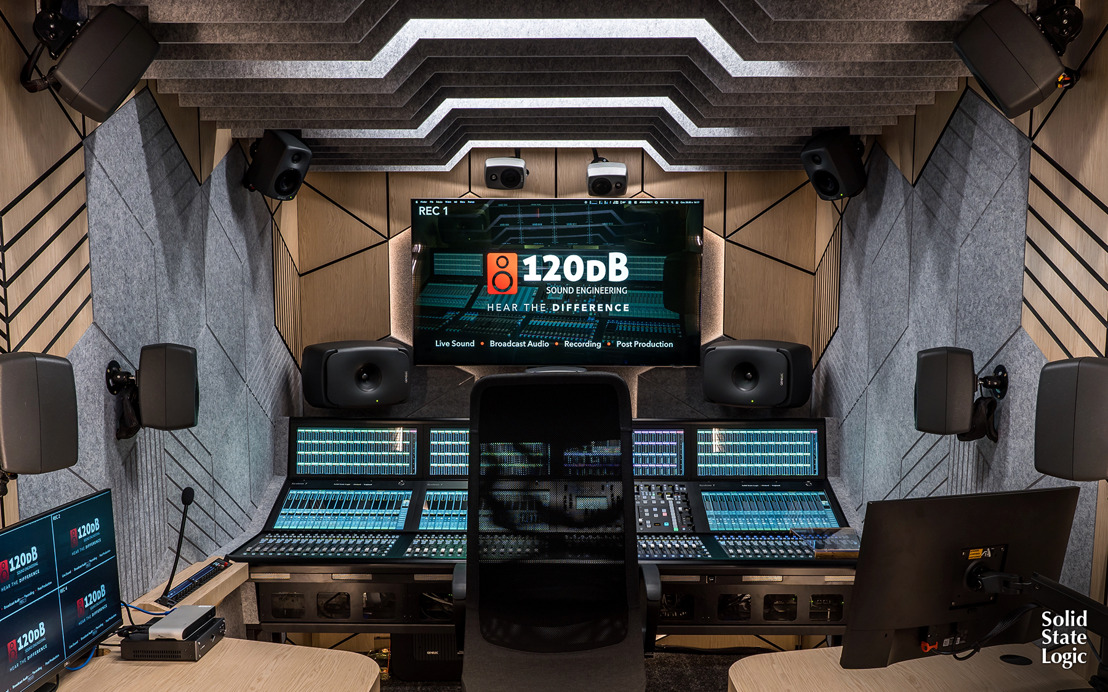 Bieruń, Poland, August 22, 2022 — 120dB Sound Engineering in Poland recently rolled out a new music recording and broadcast production truck equipped with a Solid State Logic System T S500 console surface configured with 64 faders powered by a T80 Tempest Engine offering 800 channels of DSP and outfitted with a 7.1.4 Dolby Atmos monitoring system. The inaugural project for the new truck, which is named ATMOS, was a multitrack recording of The Polish National Wind Orchestra (Narodowa Orkiestra Dęta w Lubinie) performing at a musical celebration of Ukraine in Warsaw, Poland in late April.

The main reason for choosing a System T for the ATMOS truck was simple, according to Michał Mika, owner and founder of 120dB Sound Engineering. “We are native in Dante,” he says. The company, which is headquartered in southern Poland, near Katowice, has long worked on eSports broadcast events, including for Turtle Entertainment and ESL TV, which rely heavily on Dante networking. When 120dB launched its first OB van, ST1, in 2018, it was designed around a System T S300 to take advantage of the SSL platform’s native support of the Dante protocol. “Then, when we wanted to grow and build a bigger truck, we decided that a big SSL System T would be the best choice for us,” Mika says.

Both the System T S500 in the new ATMOS truck and the System T S300 in ST1 were supplied by Krzysztof Kowalewski at Audiotech Commercial, Solid State Logic’s distributor in Poland.

The new truck carries SSL SB32.24 Stage Boxes supporting up to 256 mic inputs, plus an SSL SB8.8 Stage Box that transports eight mic/line inputs and eight line outs. A Focusrite RedNet interface delivers 256 channels of MADI to and from the Dante network. Recordings are made to a redundant 256-track Reaper DAW system running on twin Macintosh computers. Cubase and Pro Tools are alternatively available.

The focus on music and the truck’s significant channel capacity enables ATMOS to take advantage of a niche in the Polish broadcast and mobile production market. “It’s normal for us to work with almost 200 channels,” Mika explains. “National TV in Poland still doesn’t have enough trucks that can handle that number of tracks, so they order trucks from us.”

120dB Sound Engineering has been busy this summer, supplying both ATMOS and ST1 to record a variety of events, including multiple outdoor shows on the Męskie Granie 2022 concert tour, featuring major Polish artists. A release from Męskie Granie 2020, recorded by 120dB, was recently certified Platinum in Poland. The company also recorded Jimek — composer Radzimir Dębski, one of Poland's best known music producers — performing his unique symphonic orchestration, The History of Rap, a project that required 190 tracks. ATMOS also participated at the Film Music Festival in Krakow, hosting listening sessions and presentations.
​
​Taking ATMOS to the next level with System T
​The musicality of any mix made through the System T is what many operators who work in the 120dB trucks comment about, Mika reports. “When you’re mixing, everything is musically glued together. If you’ve got good sources, even if you don’t do anything with EQ or dynamics, it will be OK. Just push the faders up and it will be great sounding. After that, you can make something better, but you don’t have to do anything — on an SSL, you can do nothing, and it will be OK!”

As visiting mixers soon discover, and as 120dB’s engineers already know, the layout of the System T is very logical and easy to operate, even if they have not previously worked on a digital console. “It’s very easy to do what you want to do,” Mika says. “It’s not an analog console, but everything is where it needs to be. You don’t need to find some parameters or knobs. Even if you are new to the System T, everything is on the channel strip, just like an analogue console.”

ATMOS is not the only truck that supports immersive mixing in Poland, but it is likely the only one to offer an uncompromised monitoring environment. In a TV production truck, Mika says, the audio control room is typically very small. “In TV trucks you always have to fight with the room and with poor monitoring. In TV trucks you put the Dolby Atmos height speakers where you can, not where you want them. It’s impossible to produce good sounding audio material in those rooms.”

But in 120dB’s ATMOS truck, Mika says, the dimensions and the acoustics have been optimized to create an experience that is much more like a brick-and-mortar mixing facility. “Our room is 2.5 m (8 ft.) by 4.5 m (18 ft.), and we have a 2.2 m (7.2 ft.) ceiling height, so it’s like a regular audio room in a production studio,” he says. “We want to give audio operators a better place to work.”
​