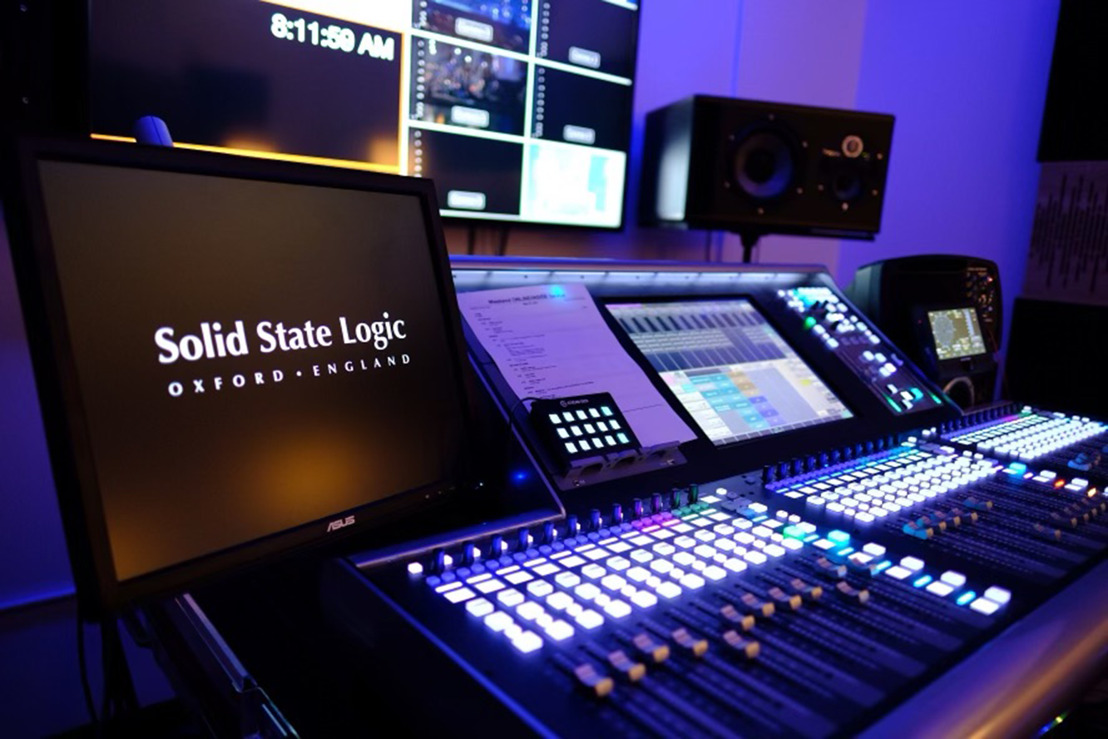 Corona, California, August 5, 2021 — During the pandemic, sound engineers at Crossroads Christian Church turned off the P.A. and moved the Solid State Logic Live L500 digital audio mixing console at front-of-house into another room, where they mixed monitors for the praise band while creating a separate broadcast mix. The improvement in the quality of the live streaming mix was so noticeable that the church has now added an SSL Live L200 in a new broadcast suite in preparation for the L500 returning to front-of-house as in-person services begin again.

“My production manager, Fred Manuel, mixed monitors and a broadcast mix from the L500 for almost a year,” says Tyler DeYoung technical director and front-of-house engineer for Crossroads Christian Church, a Southern California megachurch with a congregation of over 8,000 members. “And we really noticed a difference in the quality.”

L500 and L200: Versatile in broadcast and live applications
But once the 3,000-capacity main worship center is full and the P.A. is back on, DeYoung says, creating a broadcast mix from FOH, as they did before the pandemic, would be a backward step. “We’re mixing for what’s going on in the room, not what’s going online,” he says. “We can make it sound good, but it’s not a dedicated broadcast mix.” So, at the beginning of 2021, the church purchased an SSL L200 from longtime AVL production equipment provider and systems integrator CCI Solutions to be ready for when worshippers start to return.

DeYoung and his staff integrated the new desk themselves, installing it adjacent to the video control room in a space last used to house equipment for a cellphone tower at the campus. The L500 at front-of-house, which was installed in 2017, receives 96 inputs from the stage and now feeds 64 MADI channels using SSL’s Blacklight II Concentrator to the broadcast room. “Our broadcast console gain-shares from the front-of-house console,” says DeYoung.

An SSL SB 32.24 Dante stagebox provides local I/O for the L200 in the broadcast suite, for sources such as graphics computers and the hosts of the online broadcasts, who are in a studio next to the video room. “It’s also for future-proofing,” he says. “If we’re going to be doing any recording, we can send it upstairs and use the L200 and the local I/O for that.”

While the FOH engineer relies solely on the L500’s onboard processing, DeYoung has installed some outboard units in the broadcast room to enhance his mixes on the L200. “I use the in-console delay, bus compressor and things like that,” he says. “Then I have a Lexicon PCM70 that I use for snare verb and a TC Electronic M-One for an overall drum ‘verb, although I really like the console’s reverbs as well; the Effects Rack cathedral ‘verb is probably one of my favorites.”

DeYoung is also using Waves plug-ins for vocal and instrument reverbs with the L200. “We jumped into Waves mostly for our vocal chain, so we can do auto-tuning live,” he says. “There’s a reason why you use an SSL bus compressor, but I don’t need Waves to do that for me. This is an SSL console, and it only gives me one sample of latency.” Similarly, he says, when anyone asks him why he’s not using this or that plug-in, “I tell them, I don’t need any of that—I have SSL mic pre’s.”

SSL helping deliver an ’in-person’ experience for congregants at home
To deliver an authentic experience to the online audience, DeYoung mixes in a half-dozen microphones positioned around the main worship center. “We have four audience mics onstage, two  large diaphragms and two shotgun mics. We have two more large diaphragm condenser mics out at front-of-house, for room ambience and natural reverb.”

The church streams two Sunday morning services and a Wednesday evening service. “We also have a volunteer, Tommy Wright, who mixes for our Thursday night College/Young Adults Ministry,” says DeYoung.

The new room has turned out to be the perfect location, he says. “It’s a decent size and not perfectly square, which is good.” The in-house team installed acoustic treatment but haven’t had to add soundproofing. “Even when services are running, I barely hear anything from the main room.” DeYoung monitors through a pair of Focal midfield speakers, additionally referencing the livestream on a TV or via his cellphone or computer speakers.

If at-home worshippers want a truly authentic experience they might need to turn the volume up on the livestream, because the church likes the sizeable praise band to be at rock concert levels in the worship center. “In the room we’re running around 98 dB SPL,” says DeYoung. “It might even hit 100 dB. Speaking and talking head stuff is in the 76 dB range. But you don’t feel fatigued. It’s more about energy and enjoyment.”